The world’s first ship model basin built in England at suggestion of William Froude in 1872 convinces shipbuilders around the world in the benefit of ship model tests.

Admiral , a prominent naval architect, the designer of the first round ships (armoured batteries known as 'popovkas'), the Livadia royal yacht, the first Russian  battleship Petr Velikiy ('Peter the Great') and the  ocean armoured cruiser , is one of the first voicing the need for a national model basin.

The Naval Technical Committee of the Naval Administration in charge of all shipbuilding matters for the first time favours the idea of establishing a ship model tank in the country as initially suggested by a great Russian scientist .

The idea of setting up a model basin finds active support from the Head of the Naval Administration,  Great Duke Aleksey Alexandrovich. 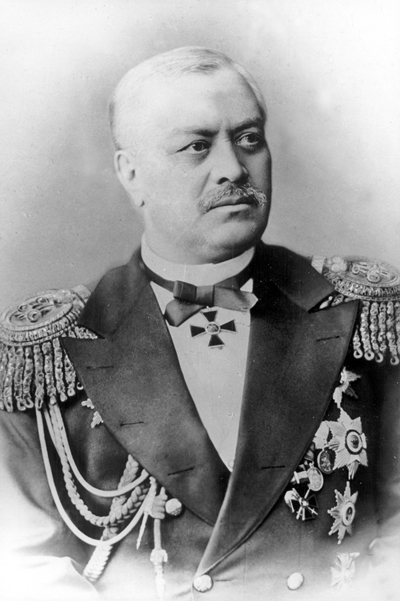 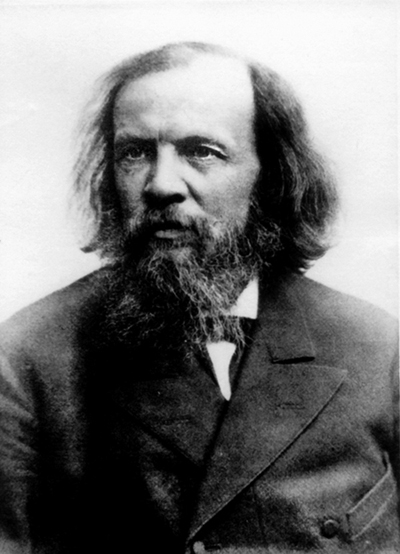 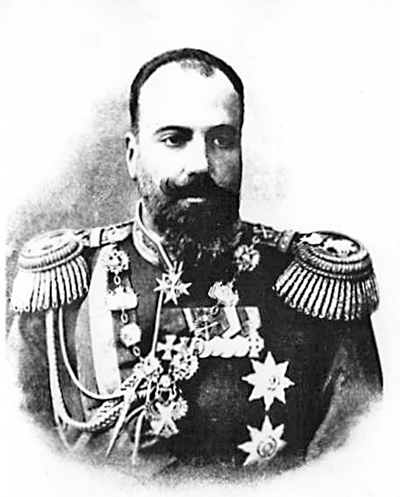 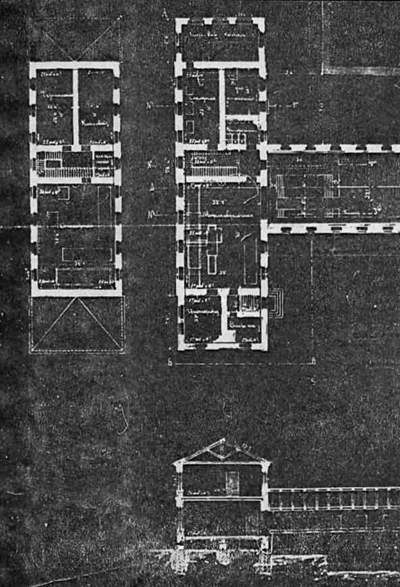 A part of the Model Basin building drawing (blueprint) 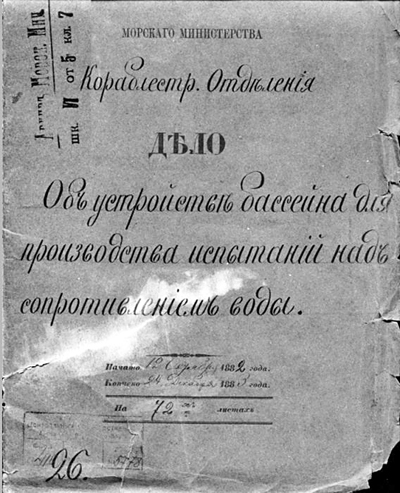 A channel trough encased in concrete, a building over it and a  block of office and auxiliary rooms are erected on the New Holland Island in St. Petersburg. , a lecturer (later professor) at the Naval Academy is appointed the superintendent of the new institution. 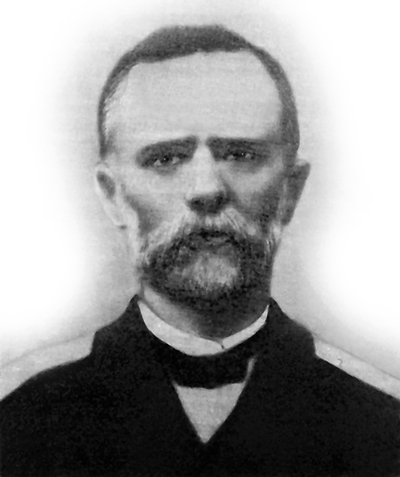 Completion of work associated with towing carriage and other equipment installation. In June, the Tank moulds its first wax model of the Gertsog Edinbourgskiy ('Duke of Edinburgh') armoured cruiser. Commencement of verification tests with  armoured battleship and Rossija ('Russia')-class cruiser models. 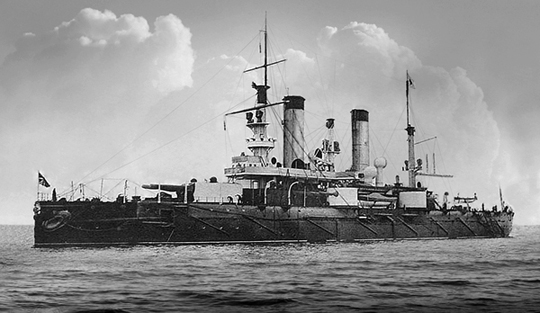 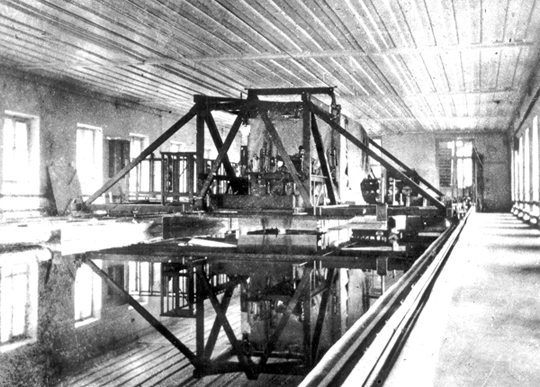 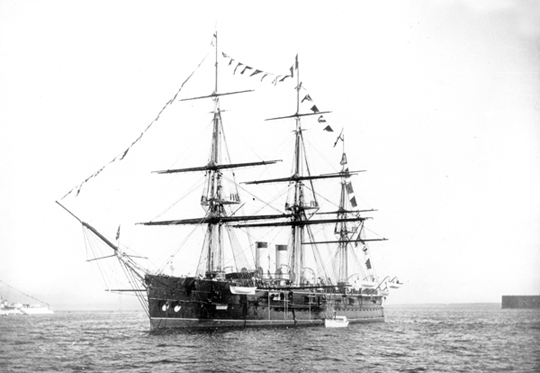 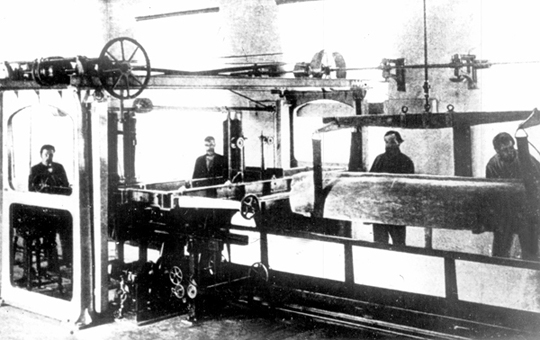 The cruiser wax model moulding (right) before planing off

Official commissioning of the Naval Administration Towing Tank, the first in Russia and the sixth in the world research institution performing ship model tests to find engine power requirements for specified speeds and hull lines with the least power requirements.

On March 8, Emperor Alexander III accompanied by royal family members and  officers of the Naval Administration visits and closely inspects the Towing Tank.

It is officially assumed to be the Krylov Centre foundation date. 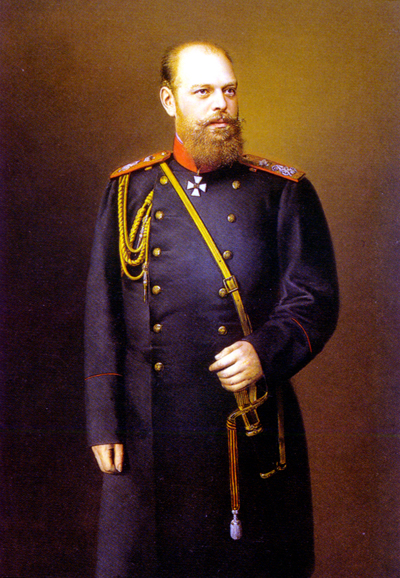 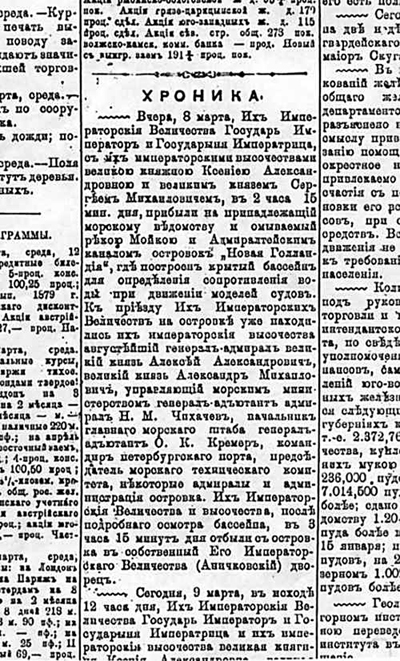 The Tank completes testing the Osliabia fleet  battleship model, the first ship for which the lines drawing was generated based on test results and recommendations of the Towing Tank. Earlier model tests served only for verification purposes and their results were never applied in practical design. 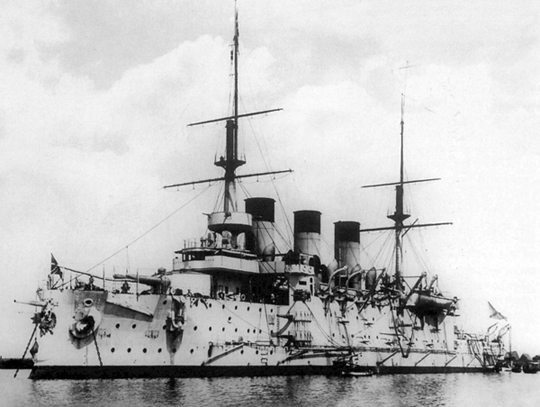 On January 3, after  leaves the Tank, Naval Administration Order No.276 appoints Captain of the Admiralty  'the Acting Superintendent of the Tank'.

suggests establishing a scientific institution that should include the towing tank, testing and  laboratories for research on ship construction materials, a mechanical laboratory and an electrical engineering laboratory.

The first Russian submarine Delfin ('Dolphin') design and model tests begin. The work goes on in the Towing Tank building and the project manager is , the Chief Assistant to the Tank Superintendent.

Thus, the Towing Tank becomes the birthplace of the Russian professional submarine design. 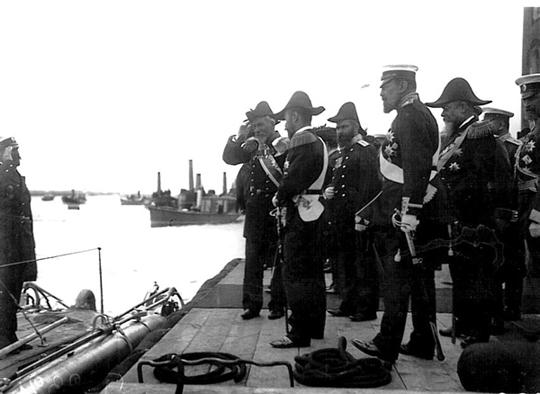 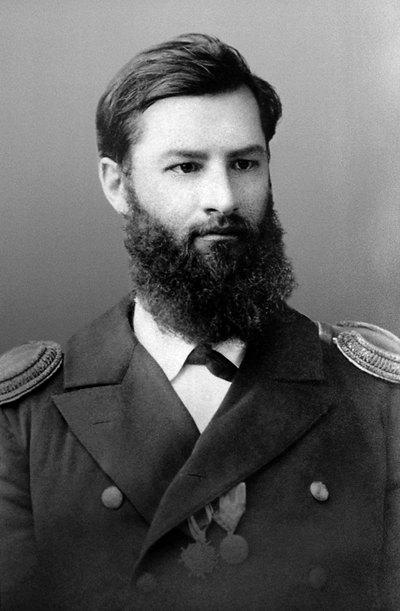 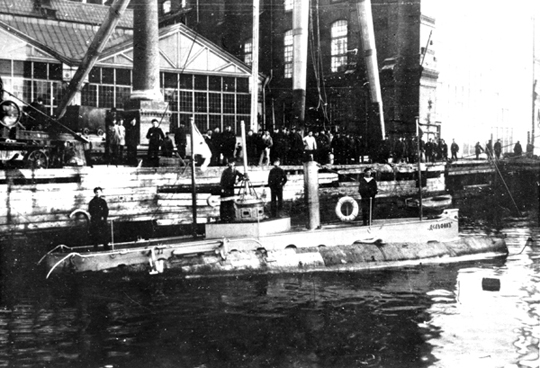 The Delfin submarine at the Baltic Shipyardquay 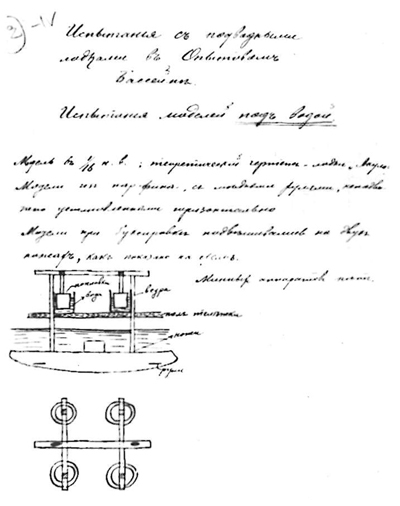 In the same year, Admiral  orders the Tank to perform model tests of the world’s first  icebreaker Ermak for hullform optimisation. He also stages a series of model tests for the Pertopavlovsk fleet armoured battleship in order to look into subdivision and damage control issues. 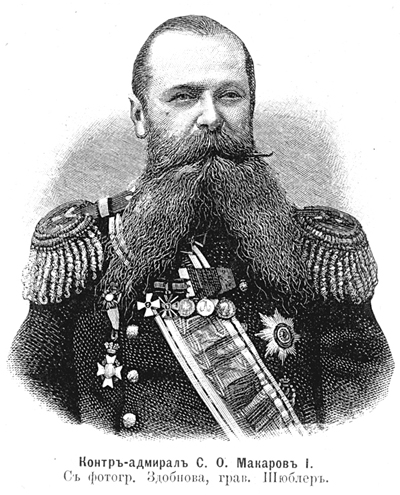 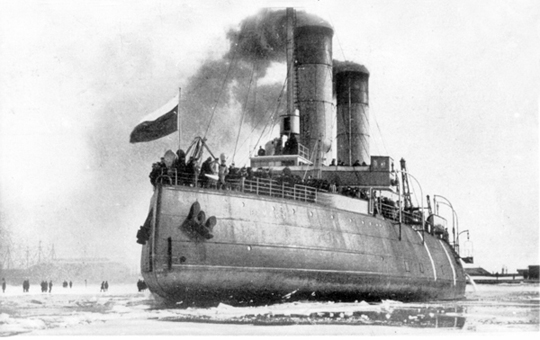 armoured ship  Apraksin grounded in rocks off the Gogland Island. The supervisor of the operation Rear Admiral  has requested assistance from the Towing Tank. The Tank built and tested a model of the ship. The results served for making practical calculations and experimenting at the accident site. That was an important contribution to the eventual success of the operation, which many experts believed to be hopeless. 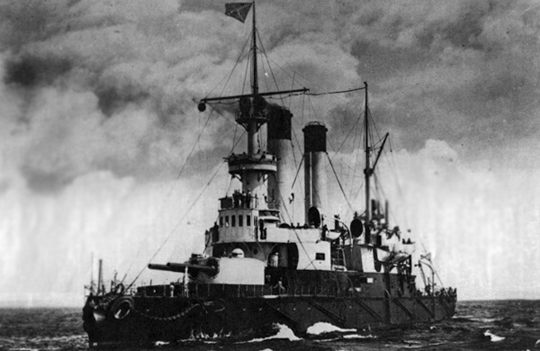 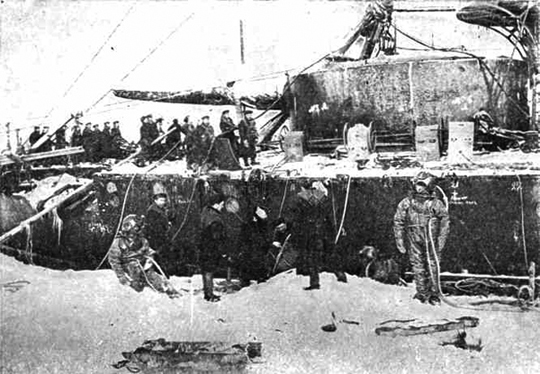 On April 3, Emperor Nicolas II visited the Tank and 'deigned to be entirely pleased with both the performed experiments and the observed order of things, and expressed his Imperial gratitude to the Superintendent of the Tank' (the quotation is from ’s service record). 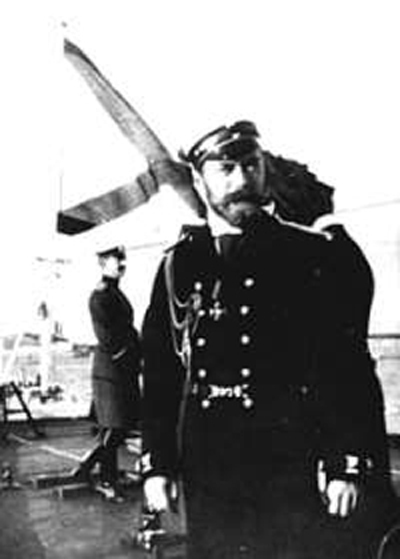 Emperor Nicolas II on board the Askold cruiser 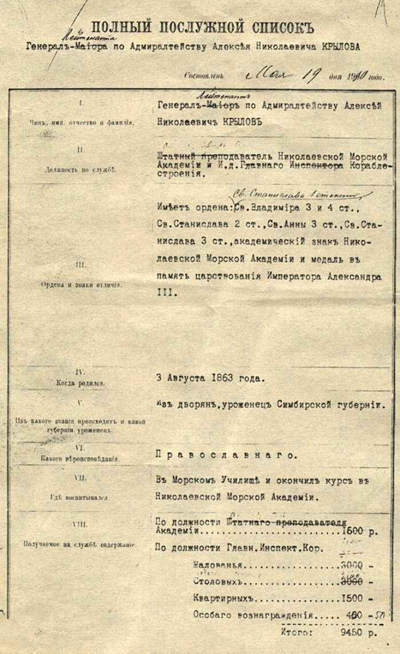 In the same year,  joins a voyage on board the  cruiser Askold to study ship hull vibration & deformation behaviour. 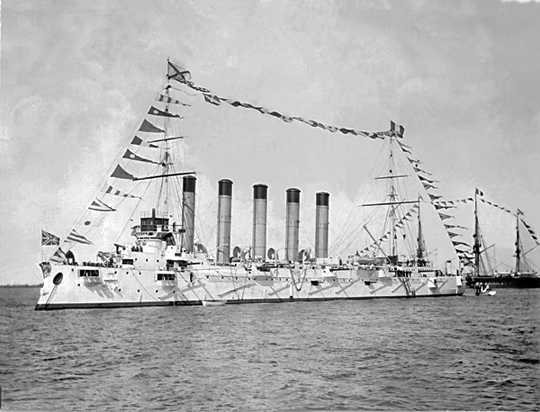 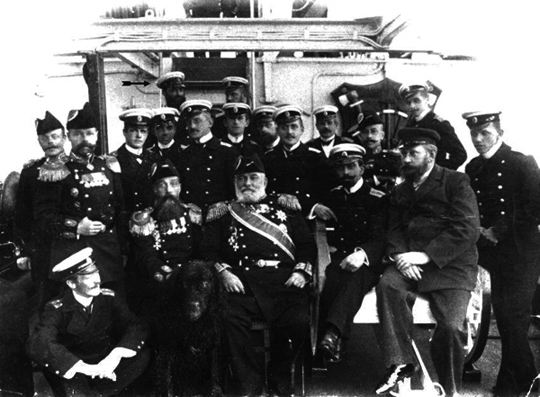 A.N.Krylov (top left) with the officers of the 1st-rank cruiser Askold