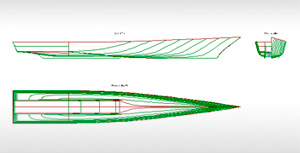 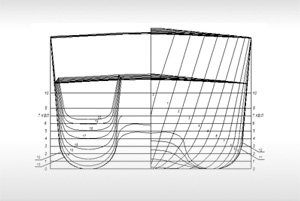 At present the Division has taken an initiative of research and design studies in an effort to develop the engineering concept of advanced corvette and destroyer. The new hull architecture developed by the initiative of the Division provides a basis for further feasibility analysis in terms of specific ship projects.

In the development of documents for shaping up the Russian Federation State Program «Development of shipbuilding» the Division is responsible for the foresight analysis of naval shipbuilding.

State- analysis of the shipbuilding industry including internal and external factors critical for the Russian shipbuilding, the main challenges have been identified with a proposed roadmap to solve these issues.

In support of this program the methodology was elaborated to validate the plans for development of advanced R&D in the field of shipbuilding, integrated analysis approach to evaluation of the future improvement directions for naval ships. Based on foresight methods the goals and key directions in the naval shipbuilding were formulated for the R&D  to ensure  research & engineering development in the field of naval shipbuilding up to 2040. In this connection the relevant performance indicator system was generated for monitoring the work progress under R&D subprogram.

At the request of the Russian Federation MoD we performed a state- and trend analysis of foreign navies’ surface combat ships and boats. Based on this analysis we made a forecast of the main trends in development of aircraft carriers,  combatants, assault ships, , missile and patrol boats as well as supplier vessels up to 2020.

The project focused on the navies of the USA and other NATO countries, Japan, Australia, Sweden and China. The development of other world’s major fleets was also scrutinized.

Investigations to examine the ways for raising the technical & economic efficiency of ships, optimization of processes in development, delivery, operation, maintenance and decommissioning of naval technologies throughout the life cycle to meet the state- requirements (2005–2009)

Analysis of the Russian & foreign experience to identify the requirements and generate the regulations, standards, norms and technical documentation covering all phases of naval technologies’ life cycle. Formulation of the program for relevant activities in this field up to 2011. Some specific regulatory documents and guidelines were drawn up under research project «Kristallizator».

One of the most important regulatory document developed under this project is the «Main Terms of Ship Acquisition for MoD» (to replace the outdated document issued in 1983 before the Russian Federation became an independent state). The purpose of this document is to regulate the relationships between MoD organizations (customers) and industries (suppliers) regarding the contractual obligations (deadlines, quantities, quality). This document has been agreed by all concerned parties and submitted to the Government for final approval.

The Regulations define the procedure and work content in design and construction of ships and vessels, regulates the relationships between state customers, ship designers and builders, and federal authorities responsible for the state policy and regulation regarding the military industrial complex.

The Regulations were elaborated with involvement of research institutes, design bureaus, ship repair and shipbuilding yards, equipment suppliers, etc., on the one hand, and state customers’ and federal authorities, on the other hand.

The Regulations were approved by the Military Industrial Commission of the Russian Federation Government on 24 May 2011.

Customer — Ministry of Industry & Trade of the Russian Federation.

A series of experimental studies were conducted at the fire test facility of KSRC to determine the combustion characteristics of typical elements of combustion load components.

The first stage of experiments focused on ship cables of various grades.

The research was aimed to determine:

It was a  project with Malakhit, AKIN and Prikladnaya Khimia Research Center. The purpose was to develop new  systems friendly and safe for the environment, crew, cargo and ship equipment.

The following fixed  systems were developed:

The tests confirmed the  of systems. The rated  concentration of nitrogen is about 28% due to a combined effect with aquafog, which is more than 30% less than required for fire suppression with nitrogen only. The system also provides efficient cooling of structures and smoke deposition within the affected compartment. 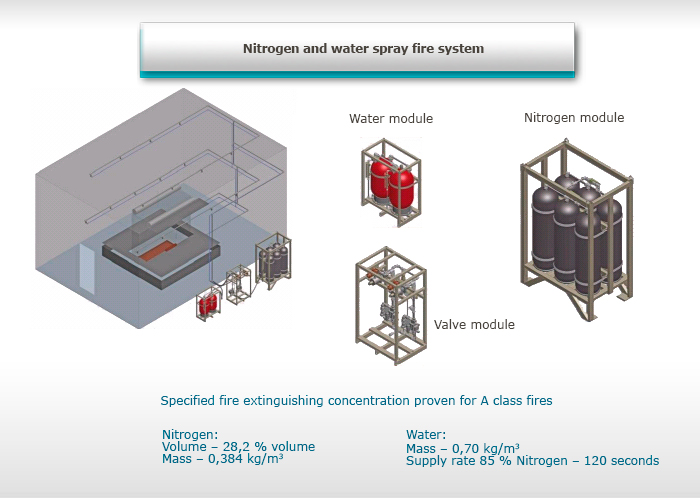 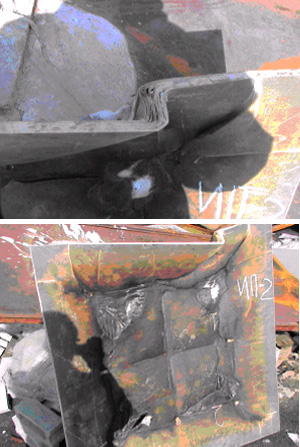 Experimental and theoretical studies were performed to determine the strength of ship hull structures made of polymer composite materials (PCM) exposed to elevated temperatures during fires.

General recommendations were given regarding fire safety measures for ships and vessels with PCM hull structures.

The main hazard in this case is lower resistance to elevated temperatures caused by fire accidents as compared to traditional steel structures.

test rig developed for this research was used to test the advanced PCM structures under temperature and mechanical load conditions characteristic of ships. Based on the experimental data the method was proposed for engineering evaluation of current temperatures in structure layers and variation of structural strength characteristics. 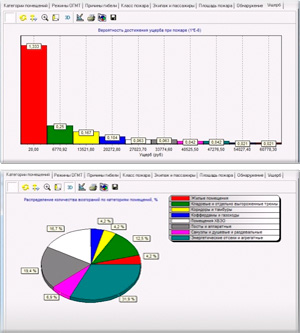 The purpose was to create the methods and software to be implemented in shipbuilding practices as a technology for formal safety assessment (FSA).

FSA technology presents a rational and systematic approach to risks assessments for shipping. This approach was called for in view of accident statistics at sea as well as inadequacy of regulations, which cannot cover all specific features of engineering structures. The purpose of FSA is to assess the cost implications and merits of design solutions in terms of risks mitigation.

The FSA methods have long been developed at the international level. The main distinction of the proposed FSA procedures is the use of computer simulation of the fire propagation based on the electronic ship model for developing the fire accident scenario and analysis of the accident consequences.

The electronic panel is an analogue of hardcopy documents issued by designers to support  measures on board the ship, however it has a far better capabilities due to computer technologies. Visually, the panel presents interactive deck plans with details required for accident handling. The decision is supported by the following information:

The electronic panel is able to store large amount of data with easy access to the relevant information. Unlike other known means of information support, this tool enables prompt response to varying accident conditions and gives advice based on the current situation.

As the operator inputs data on accident development, he is automatically displayed prompted:

At the operator’s request the deck plans may also indicate locations of  tools, ship equipment, category of compartments, types of enclosures, etc.

Electronic panel is also able to generate a package of documents issued by designer in support of accident prevention. 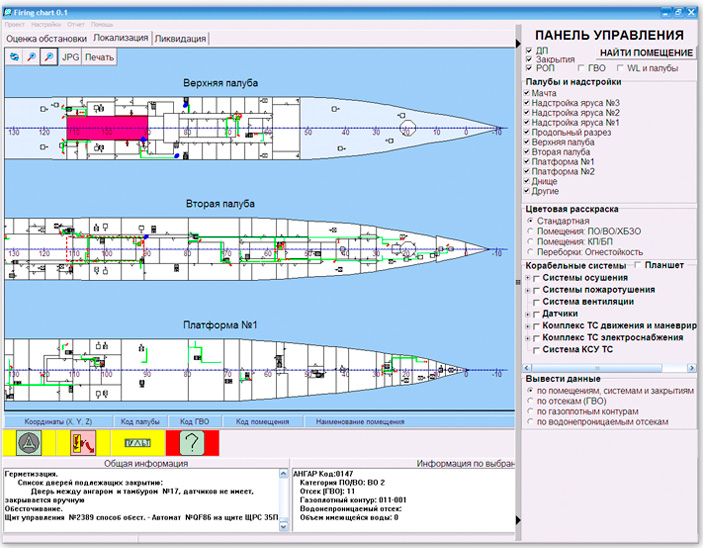 The Division has maintained  cooperation with shipbuilders and suppliers of outfit equipment, weapons & sensors as well as with the R&D institutions of MoD. Our customers and contractors include:

The Division keeps good business relations with the leading R&D institutions of MoD: