tests have been conducted on a prototype of the new system version – (download a leaflet). It is the first Russian system of this kind which enables automatic tuning of ship degaussing devices at sea.

Basic design of Kaskad MP system has been elaborated. It is a  Russian system designed to cancel electric fields emanating from the propeller/hull galvanic couple and to protect propellers against corrosion.

Industry standard OST5R.0754–2012 «Ships & marine structures. Rules of magnetic compatibility in design, construction, operation of ships and marine structures, development & delivery of equipment» has been elaborated, approved and introduced since . The standard is covering new EMC technologies applied in shipbuilding, which are based on a rational combination of measures taken by ship designers and equipment vendors involving tests and instrumental verification of EMC efficiency.

Overheat detectors for threaded joints of ship electric equipment have been developed to support diagnostics of fire hazardous situations. These instruments enable visual detection of slack threaded contracts during operation. Joint commercial production of the detectors is planned in association with JSC Krizo. Customer – Ministry of Industry and Trade, Russian Federation.

Preliminary design of an integrated accident monitoring system has been worked out for the offshore Arctic oil & gas fields. The system is based on fixed- and instrument packages. Customer – Ministry of Industry and Trade, Russian Federation.

Hydrophysical measurements have been performed using Krylov’s  hydrophysical instrumentation system at the Prirazlomnoye offshore oil field and along the submarine gas pipeline in the Baidaratskaya Bay as part of comprehensive hydrological and geological surveys. 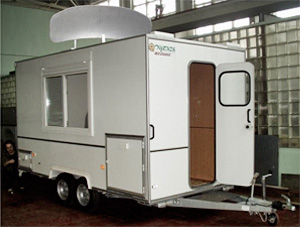 An experimental prototype of portable instrumentation system, first-of- in Russia, has been made for & concurrent measuring of ship’s  signatures including radar, IR and laser signatures on shipbuilding berths or base sites. 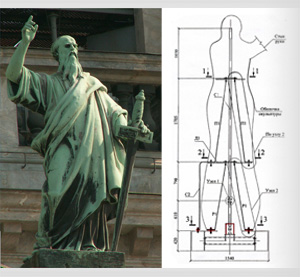 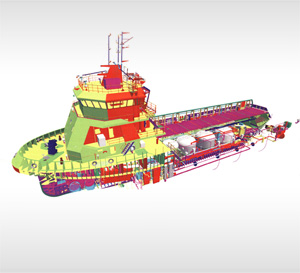 Under this phase KRSC has completed the basic design of type systems for cancelling ELFE and normalizing the permanent magnetic field in ships and other marine platforms to meet permissible levels required by the Sanitary Code.

The strongest ELFE sources in ships are components of ship’s electric grid: cables, boards and powerful distribution and switching gears. The level of electromagnetic emissions generated by such devices is governed by current amplitudes in electric circuits, while the absorbed currents are defined by the load changing during ship operation.

ELFE levels are efficiently reduced using automatic cancelling technique. Experimental studies on a breadboard model of such system confirmed its advanced capabilities. Presently, a test prototype of the system is being manufactured.

The system designed for normalizing the permanent magnetic field in ship compartments to reach the levels prescribed by relevant regulations is using an assembly of circuits arranged around the «ceiling» and «floor» perimeter to generate a sufficiently uniform field within the given compartment so that its level is close to the Earth’s magnetic field.

A stable current source has been developed for the electric circuits with low current ripple and adjustable settings. The magnetic field density is monitored using a  field indicator. At present a test prototype of the system is being manufactured.