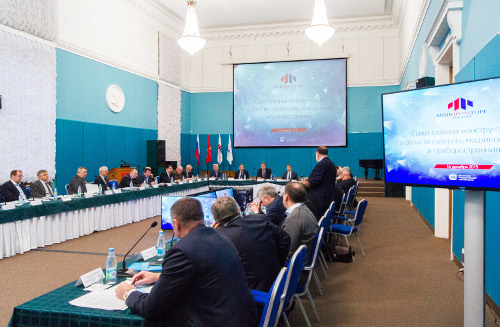 On December 14, 2015 Aleksandr Potapov, Deputy Minister of Industry and Trade of the Russian Federation and Chairman of Chief Designers’ Council for Naval Mechanical and Instrument Engineering, led the first meeting of the Council at the Krylov Centre. Among other issues the members of the Council reviewed the organization chart and appointed the participants of working groups — «Marine engineering» and «Instrument engineering».

KSRC Director General Vladimir S. Nikitin was appointed as a Chairman of «Marine engineering» working group, and Andrey Dobrokhotov, the advisor to President of JSC «United Shipbuilding Corporation», was elected as his deputy.

The participants of the meeting also discussed the issues related to:

The meeting of Chief Designers’ Council was concluded by approval of its work schedule for 2016. Besides, Aleksandr Potapov instructed the chairmen of both working groups to finalize and submit to the Ministry of Industry and Trade till the end of this year the proposals developed by the Council to define the requirements to marine and instrument engineering products to be considered domestic.

Up
Next: Arctic: Today And The Future