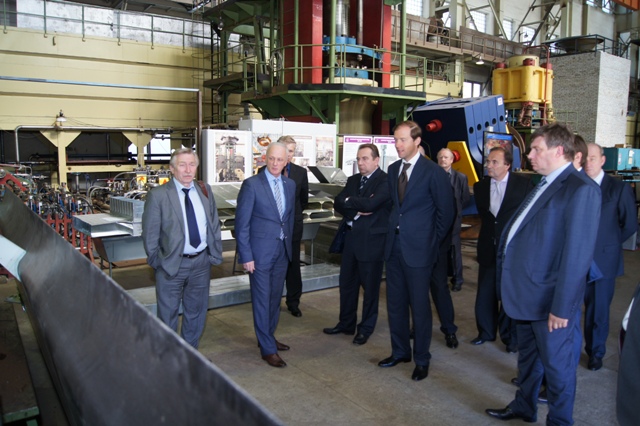 On Friday, August 16, Russian Minister of Industry and Commerce, Mr. Denis Manturov had an official visit to St. Petersburg. KSRC was one of the points in his itinerary. During this visit, Mr. Manturov had a round about the KSRC facilities and conversations with scientists and engineers.

Among other things, the Minister saw the facilities for the studies on electromagnetic compatibility, physical signatures and those for environmental monitoring, as well as the new ice test tank to be commissioned this November. This new tank will significantly expand experimental capabilities of the KSRC and maintain its background in model studies.

Minister Manturov also visited pressure chambers for strength studies of underwater vehicles and outboard devices. These chambers can simulate the diving to the deepest points of the Ocean. Special equipment of lifetime test workshop allows optimization of design solutions, justification of reliability and strength guarantees for most various engineering structures.

After the roundabout Minister Manturov held a session «On implementation of Federal Target Program Development of Maritime Technology for 2009–2016 and on using scientific and technical results obtained» and bestowed the best shipbuilders with official awards.

Opening the session, Minister Manturov said:
«Today we are discussing the most important problem: development of commercial shipbuilding. We have to solve a number of strategic problems which will determine our actions for several years to come. Let us first analyse where we are now and then pass on to new challenges.
During the last three years we put a lot of efforts into the core issue in our commercial shipbuilding, i.e., bridging of the technological gap accumulated after nearly two decades of stagnation in the industry. This was the main purpose of the Federal Target Program Development of Maritime Technology for 2009–2016, so this program is focused on development of scientific, technological and design potential of Russian shipbuilding.
Although this program will continue for three more years, it can be said already now that we have accomplished the bulk of our tasks. So far, 640 new technologies have been developed, of which over 1/3 are . 75% of our developments were patented, which confirms their novelty. All these developments are intended, to various extent, to achieve the objectives envisaged by four strategies:

Obtained results of R&D activities touch nearly all the segments of commercial shipbuilding (wildcat, drilling and production platforms, , tankers, cargo carriers and passenger vessels of various classes). They encompass technological processes at all stages of production cycle: from design to commissioning.
The audit performed by inspection agencies has shown that this program is in  of most federal target programs in terms of efficiency. As of the end of 2012, all target indicators of this program were significantly exceeded, and the number of newly developed technologies is nearly three times higher than planned. The years 2013–2015 will see the completion of 324 projects with total worth of 34.7 billion roubles, including 50 research projects and 274 development works.
As a rule, the messages about scientific developments face skeptical comments that all this is just put on the shelf. We are doing our best to implement these results in the industry.
In terms of final production, 43 conceptual and 7 detailed designs have been developed under this Target Program. Already now, thanks to the developments of 2009–2012 годах, the production with total worth of over 200 bln. Roubles is either started or maintained.
According to preliminary assessments, after completion of the program, the total output of shipbuilding industry till the year 2020 will exceed 1 trillion of roubles, which is one order higher than the sum invested to corresponding R&D and construction activities of the Program.
It is especially important that, apart from R&D results, the Federal Target Program envisages the development of new design and test facilities. From 2009 to now, 28 capital developments were commissioned, including 11 commissioned this year. The work on 31 more development is in progress.
One of these capital developments we have seen here: a unique ice test tank.
All this should ensure the implementation of obtained results in construction of globally competitive commercial vessels.
To sum up, I can say that so far we have accumulated a strong scientific background for several years to come. Further on, the activities in this direction will continue under Government Program Shipbuilding Development in 2013–2030».
The session itself was held behind closed doors.